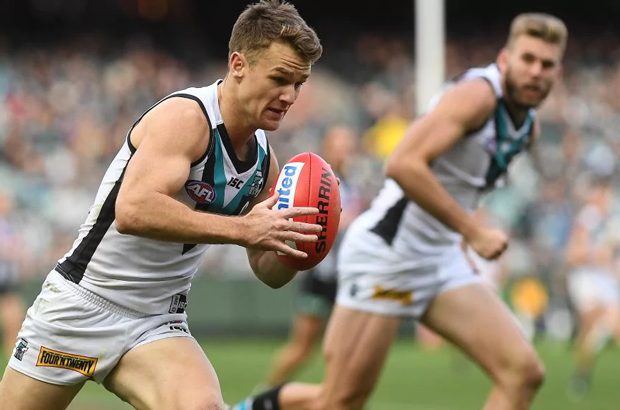 The twilight game on Saturday takes us to the Adelaide Oval, where visiting West Coast will need to beware a Port side stinging from a sense of injustice.

Then, on Saturday night, a battered and bruised Collingwood need to get the four points against the Lions who are continuing to impress.

The similarly injury-plagued Giants will rely on their Canberra fortress when facing a rejuvenated Adelaide outfit.

Missed our preview of the early games? Read it here

With just one win from their last four, Port Adelaide look to have stalled at the wrong time of the year.

Yes, they were unlucky not to win last week's showdown, after Josh Jenkins's shot was awarded a goal after probably brushing the post, but these are the calls that you just have to cop in a season of footy.

The big question is whether the Power can come out and respond, or will they still be feeling aggrieved after last week's defeat, failing to concentrate on the task at hand.

If they're not careful, they will slip up and be taking an early holiday in September.

West Coast meanwhile also need to respond, after the media spotlight was pointed squarely at them and Andrew Gaff following his well documented moment of madness.

It's hard to play an away game at the Adelaide Oval at the best of times, so like their rivals, their minds will need to be on the job.

In a tough game to call, the home crowd may prove the decisive factor.

Wet and windy, so expect a low-scoring, stoppage-riddled game. 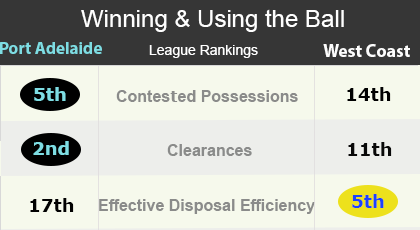 With the tricky conditions, Port Adelaide's superior contested possession and clearance numbers will stand them in good stead.

The Eagles meanwhile owe their success in 2018 to clean ball use. But with wet weather, precise kicking goes out the window, so the conditions definitely favour the Power.

Reasoning: Without Gaff, the Eagles' mids will be overwhelmed in a midfield-dominated game.

It looks as though Collingwood's bad luck through injuries has finally caught up with them in the past two weeks.

While it is definitely no disgrace to lose to the Tigers and Swans, Collingwood fans are surely anticipating the return of their stars.

The biggest loss has been Adam Treloar, whose dynamic running and ball-winning ability at the stoppages really gets the Pies moving forward.

Against a good Brisbane midfield, Collingwood veterans Steele Sidebottom and Scott Pendlebury will need to stand up after a below-par game against Sydney.

If they don't, the likes of Dayne Beams and Dayne Zorko will lead their young Brisbane side to an upset victory.

With so many good performances in the last two months, Brisbane will undoubtedly turn up again.

Under the closed roof, so high-scoring footy is on the cards.

This table demonstrates how evenly matched these two sides are in the midfield, where Brisbane have a slight advantage.

With numbers like these, you can't see the Pies winning by a blowout score.

Reasoning: While the Pies have more to play for and should be winning, the Lions haven been fantastic lately, and will keep it close.

If there has been one side to have an even worse run with injuries than Collingwood, it has been the Giants.

Just when they looked to be on the cusp of getting all their key personnel back before the finals, they lost four more players to injury in last week's massive win over the Blues.

In fact, there were times in the final quarter when GWS only fielded 16 players, with two coming off to get a rub down and nobody fit on the bench to make an interchange.

Even with all their injury dramas, the Giants are deserved favourites here.

With the best form of any side in the run in to finals footy, and with the game being played at Manuka Oval in Canberra where GWS have a dominant record, both point to another strong win.

While the Crows are back near their best with their guns returning from injury, they still look to be tested here.

Chilly with light rain about. Shouldn't have an impact.

Reasoning: While Toby Greene is a massive omission, both Shiel and Taranto come back for the Giants to help continue the Manuka Oval dominance.