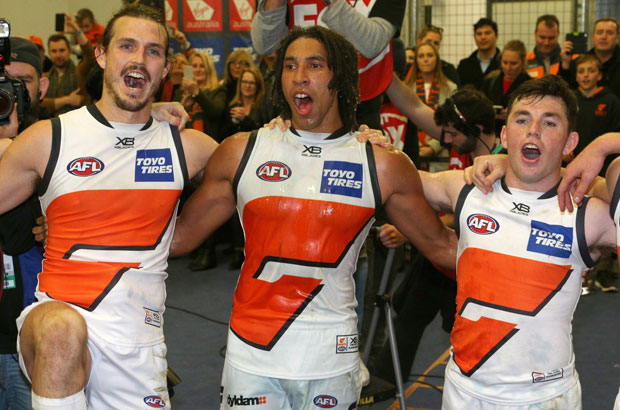 Sunday afternoon kicks off with West Coast making the long road trip to Brisbane, where they will attempt to secure a top two spot.

Then Sunday's feature game sees the Demons host the Giants, with both teams looking to put themselves in a prime position for the finals.

And in the final game of the 2018 home-and-away season, both the Saints and Kangas will be looking to give their fans some confidence heading into the 2019 season.

This game promises to be a belter, with both Brisbane and West Coast more than capable of getting the win.

Both of these clubs have gone above and beyond pre-season expectations, bringing much joy to their sets of supporters.

A win here for West Coast would have a huge impact on their finals aspirations as it guarantees a second place finish and with that, a home qualifying final.

However, a defeat would see the Eagles drop as low as fourth and relinquish their chance of hosting a qualifying final, and seriously jeopardise their chances of going all the way.

Brisbane meanwhile are fresh off a superb second-half of the season, and will be confident of another win here.

Their form at the Gabba in particular has pundits raving, with their worst home ground performance all year against GWS losing by 27-points.

This promises to be another tight affair.

A high chance of showers up in Brisbane, which will make each goal kicked extra-crucial.

Just like the Swans v Hawks fixture, this clash on Sunday also has huge ramifications on finals seedings.

A win for 7th-placed Melbourne over 6th-placed GWS could see them rise as high as fourth, while the Giants could also sneak into the top four if results go their way.

However, a win for either team would most likely give them a home elimination final, which is a significant and sought-after advantage.

After snapping their top eight hoodoo with an impressive win over the Eagles in Round 22, many are tipping Melbourne to continue on their merry way after securing their first finals spot since 2006.

They will line up as favourites against the injury-plagued Giants, who can partly blame last week's loss to the Swans on injury to key defender and co-captain Phil Davis.

After being forced to play in the forward line because of his limited mobility, Davis's direct opponent Buddy Franklin kicked the four goals that proved the difference.

But with Davis expected to play, and the return of silky midfielder Josh Kelly after missing last week with concussion, GWS should put in a strong performance.

Sunny conditions, so expect a big, partisan Melbourne crowd to get behind their Dees.

Both Melbourne and GWS play a similar style of play. It involves winning the ball in the stoppages and contests, before running or sending the ball forward.

The Dees have struggled in 2018, when they have come up against top 8 teams that match, or surpass, their contested possession stats.

It seems if this advantage is taken away, Melbourne don't have a Plan B to fall back on, and it's the reason why a loss here looks likely against another good contested ball team.

Reasoning: On top of everything else, Kelly being back will bolster the Giants' supreme midfield.

The final game of the 2018 AFL regular season sees two Melbourne clubs do battle, each with a point to prove.

North will be disappointed after missing out on finals footy, and will be looking to come out and put in a positive showing to end the season on a high.

Full forward Ben Brown will also be gunning for the Coleman medal, after he was overtaken by Jack Reiwoldt in Round 22.

If they can back up that performance, they will get the better of the Roos and give their fans some confidence heading into next season.

The final game played under the closed roof in 2018. Perfect conditions for high-scoring football.

Reasoning: Based on last week's performance, and in the last game of the season, it's unlikely that the Saints will lose by a big margin.