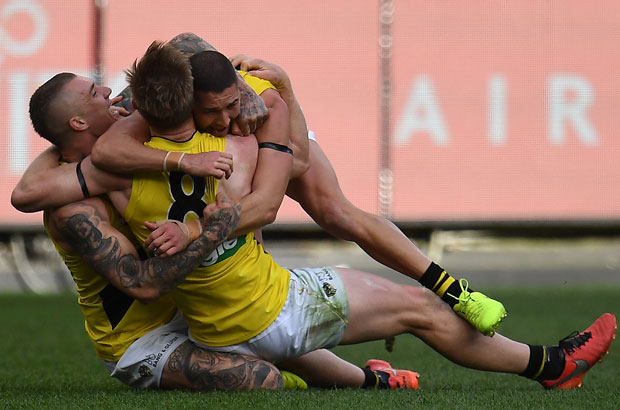 Best bets for the AFL Finals

With only one round of AFL to play before the finals are upon us, we summarise the Round 23 scenarios and how they can impact the finals seedings.

In our club-by-club review, we assess the key odds available and offer our betting predictions for the remaining teams that still have a chance of lifting the AFL Premiership Cup on the 29th of September.

With their win over fierce rivals Essendon in Round 22, the Tigers officially secured the minor premiership for 2018, their first since 1982.

This week they host the Western Bulldogs, where Damien Hardwick's men will look to extend their MCG winning streak beyond twenty.

After claiming the minor premiership, it is now guaranteed that every finals game the Tigers play will be held at the 'G.

This means that any team that wants to beat the Tigers to the premiership flag will have to find a way of defeating them on a ground where they look invincible.

And with a premiership-winning squad that has managed to stay healthy all year, most pundits are backing the yellow and black to go back-to-back.

Reasoning: The Tigers have been too good all year not to make the big dance. However, a few teams definitely have the capacity to beat Richmond on grand final day, so this bet provides some safety.

After failing to overcome the spirited Demons in Round 22, West Coast have jeopardised their chances of a home qualifying final.

A tricky and long road trip to Brisbane to face the Lions awaits them, where a loss could see the Eagles drop as low as fourth.

This would be a disaster, as it would mean West Coast would face the Tigers at the MCG in the first qualifying final.

After the impressive and unexpected success the Eagles have enjoyed in 2018, you feel they will bounce back and get the four points, securing a home final against a less challenging opponent than last year's premiership winners.

And if Adam Simpson's side are to go all the way, they need to make the most of their new fortress, Optus Stadium.

AFL Betting Tip: West Coast to be eliminated in the Semi Final @ $3.70

Reasoning: After a great year, West Coast look to be running out of steam at the wrong moment. Injuries plus Andrew Gaff's suspension makes these odds for the Eagles to go out in straight sets, great value.

In an injury-plagued season, the Pies have performed with aplomb, as they look to record their first premiership since 2010.

It's definitely possible, especially if gun midfielder Adam Treloar can get back on the park after tearing his hamstring off the bone in Round 14.

The Magpies face the Dockers in Round 23, where a win would see them finish as high as 2nd, and a loss would see the Pies drop as low as 5th.

However, against a Fremantle side with their minds already on their post-season holiday, expect Collingwood to breeze to victory and set-up a qualifying final against West Coast.

Despite going down to the Eagles earlier in the year, the Pies look to have hit form at just the right time of the year.

AFL Betting Tip: Collingwood to be eliminated in the preliminary final @ $2.65

Reasoning: Nathan Buckley has finally got all his talent to click, with a strong finals showing on the cards.

Alastair Clarkson's side find themselves once again right in the thick of things at this time of year.

The finals come a week early for the Hawks, with a crunch-game against the Swans scheduled for Saturday night.

They travel up to Sydney in a game that has huge ramifications for the top four, with the winner guaranteed a qualifying final and the sought after double chance.

If the Hawks lose however, they will drop to 6th, and have to play an elimination final against the Giants or Demons.

Both of these teams are fearsome at their best, and would fancy their chances of sending the Hawks packing.

AFL Betting Tip: Hawthorn to be eliminated in the elimination final @ $3.20

Reasoning: Despite having bags of finals experience, the Hawks' best isn't as good as most other top eight teams.

Never write off the Swans.

After looking in danger of missing the top eight altogether, the Swans have won three on the trot and will play for a top four spot in Round 23.

With the home advantage against the Hawks, you'd fancy the Swans to get over the line, especially with the likes of Lance Franklin and Isaac Heeney finding form.

If Sydney's young players can maintain a competitive level during the finals, the Swans' experienced stars are good enough to take them all the way.

However, a loss against Hawthorn would see Sydney fall to 6th on the ladder, potentially setting up an elimination final against cross-town rivals GWS.

With key Giants players about to return from injury, the Bloods will want to avoid this outcome.

Reasoning: Just a win against the Hawks is needed to secure this bet, which is less risk than predicting how deep into September the Swans will go.

After winning five in a row, GWS's dreadful luck with injuries finally caught up with them, as they went down to the Swans in the battle of the bridge.

But with so many of their best players set to return in the coming weeks, the AFL's newest team have a genuine shot at their maiden premiership.

Josh Kelly, Toby Greene and Zac Williams in particular will bolster GWS's chances, as they look to improve on the preliminary final defeats of the past two seasons.

They face a tough match on Sunday against the Demons, in what is arguably the most important game of the round from a finals perspective.

A win for the Giants would see them guarantee a home finals spot, or better yet, see them sneak into fourth place.

However, a defeat would mean GWS would finish seventh, and face a tough- albeit winnable- away elimination final against Hawthorn or Sydney.

Reasoning: With so much quality to return, the Giants are way over true odds in AFL betting markets here. However, winning against the Dees is crucial, otherwise they are on course to once again face the Tigers in the prelims.

An audible sigh of relief was heard in Melbourne on Sunday after the Demons snapped their 0-6 record against top eight teams in 2018, and secured their first finals appearance since 2006 in the process.

The win over West Coast will give the up-and-coming Dees bags of confidence heading into the finals.

However, their first task comes this Sunday, where they play host to GWS in a match that has huge ramifications for the first week of the finals.

A win for the Demons could see them rise all the way to fourth, with their superb percentage standing them in good stead.

However, a fifth-placed finish looks the most likely outcome, which would see them face the Cats in the elimination final (unless Port Adelaide pull off a miracle).

A defeat for the Demons on Sunday would mean a 7th or 8th place finish and an away elimination final against the Giants, Swans or Hawks.

AFL Betting Tip: Melbourne to be eliminated in the elimination final @ $2.15

Reasoning: Melbourne have choked in most of their big games all year. In their first finals series since 2006, this will become an issue for their inexperienced squad.

Geelong have made it hard for themselves, but look to have secured a finals spot this year.

They only need to win against the Suns at Kardinia Park this Saturday to qualify, and given that the Cats are paying $1.01 to triumph at their fortress against the lowly Suns, this match is nothing more than a formality.

Even though stranger things have happened in the world of footy, only extreme complacency and a Port Adelaide victory on Friday night would see the Cats miss out.

Geelong can't finish higher than 7th, so they will have to contend with an away elimination final to kick-start their September campaign.

But with their all-star midfield of Dangerfield, Ablett, Duncan and the Selwoods, not to mention Kelly and Menegola, Geelong can do anything in the finals.

AFL Betting Tip: Geelong to be eliminated in the preliminary final @ $7

Reasoning: It's a risky bet, but the value is worth it. Geelong are a side built for September, and after a 133-point win in Round 22, they are in red hot form.

Only a victory over the Bombers on Friday and a Gold Coast boilover against the Cats would see Port qualify for the finals.

Even the most diehard Port fans wouldn't be expecting this to happen.

But, if a miracle did occur, Port Adelaide would sneak into eighth spot where they would face an uphill task to progress further.