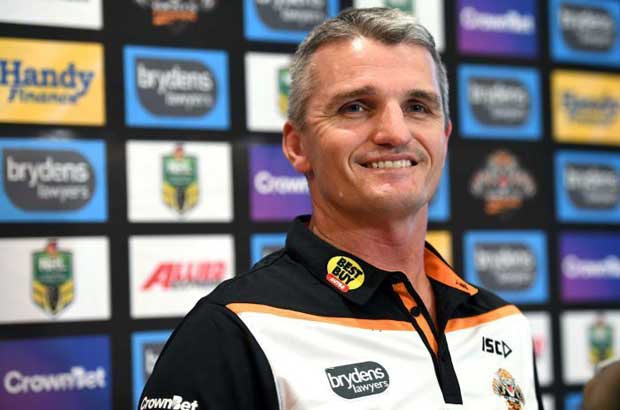 I can see Cleary now

The Raiders were at their attacking best last week, pushing the Panthers to their limits at the foot of the mountains.

With finals footy now out of reach however, Canberra's defence has resembled the turnstiles of GIO Stadium, conceding an average of 37.33 points in their last three games.

In contrast, the Tigers defence has been solid this season, conceding an average of only 17.5 points per game.

The Tigers have not gone untainted in their preparation for this Sunday's match. After a big week in the media for Coach Ivan Cleary and the Tigers, with Cleary front and centre of media speculation linking him closely to the Panthers coaching role, the fall-out could take a big toll on his team.

The only saving grace for the Tigers is their slim hopes of playing finals footy. This alone should be enough to see them fire up when they run out against the Raiders.

Reasoning: With so much uncertainty around the Tigers and its potential impact on the team, this game is not a betting proposition.

Missed our preview of Super Saturday? Read it here

This game is set to be an absolute blockbuster and with both teams coming off defeats, neither will be looking to give an inch.

Melbourne returns home to AAMI stadium this week, where they have won seven out of nine this season. With a minor premiership on the line, expect the Storm to come out firing on all cylinders and use this game as a springboard to finals success.

Cronulla has proven themselves on the road this season, with six wins from ten games and will look to capitalise on their recent record against the Storm in this must-win game.

The Sharks are somewhat of a thorn in the side of the Storm. They can get under the Storm's skin with their gritty, determined style of footy, which has got them across the line in three of their past four clashes.

Despite this strong record, conceding 33-points to the Sea Eagles is far from an ideal preparation when heading to Melbourne to face the Storm. However, the Sharks have the ability and fortitude to turn that defensive effort on its head.

Reasoning: The Strom rarely drop two games in a row and will be raring to go off the back of last week's loss. Look for Cameron Smith to steer the Storm home in a low scoring affair.